My experience with The Hat Man came in 1994 when I was about 14 years old. I was living with my grandmother and great-grandmother at the time at my home in Nashville, TN. I had been staying up really late that night and at about 2:00am in the morning I found myself lying in bed and nodding off as I was watching TV. The lights were all off and the only light that was lighting my room was coming from the TV set in front of me.

From where I was lying my bed, looking down toward my feet, I had a clear view all the way into and through my great-grandmother’s room (which was just parallel to mine) as there was no door between my room and hers. I could also see into the hallway just on the far side of her room. Just inside the hallway was the doorway going into my grandmother’s room.

As I was lying there with the covers pulled up to my face, nodding off, my eyes would open and fall, open and fall, over and over again. And then at some point, something I heard on TV made a noise and caused me to wake up and open my eyes a little wider—only this time I saw something out of the corner of my eye.
I had always had a fear about intruders and what I would do if someone ever broke into our home. For a brief moment I thought that the movement I was seeing might be my grandmother getting up to go to the bathroom. But as I moved my eyes more into focus, looking down through my great-grandmother’s room into the hallway, I very quickly realized that it wasn’t my grandmother.

What I saw gripped me immediately with fear and dread. I saw a tall human-like figure and the figure looked like that of a man. The man had no distinguishable features whatsoever. I could see no eyes, no nose or mouth, only blackness. He looked like a shadow, only darker—much darker. He had a very wide brimmed hat and a long trench coat that flowed as he moved.

I started to tremble. My heart began to race. At that moment, I came to the conviction that there was indeed an intruder in my house. As I watched him move, in the back on my mind I began to play out scenarios as to what he and I was going to do. Was I going to yell? Was I going to get up and run after him and try to fight him?

He stood there for what seemed like an eternity, just staring. He then moved very slowly and without sound back into the hallway just out of view. As I kept watching I then saw this blacker-than-black figure move toward my grandmother’s room. Just like before, he leaned his body and head in her doorway, looking at her, again not making a sound. He then leaned back and moved out of view into the hallway.

At this point I didn’t know what else to do. I was convinced that we had some kind of burglar in the house, so I summed as much courage as I could, jumped up out of bed yelling and charged into the hallway ready for a fight. I turned the hallway, and… he was gone.

Obviously my yelling and screaming startled and woke up my grandmother and great-grandmother. I told them what had happened and needless to say we didn’t go back to sleep for a long time, and when we did we left the light on.

After my experience that night and during the next day, I spent a lot of time talking with my family about what had happened. I was surprised to know that my experience of the man with the hat and cape was not the only one that had had happened in that house. As it turned out both my grandmother and great-grandmother had seen the same thing.

My grandmother relayed to me that a few nights prior, she had woken up in the middle of the night and too saw a dark figure walk past her doorway in the dim light of the hallway. Since it looked like it was wearing some kind of flowing robe, she thought it was her mother, my great-grandmother getting up to go to the bathroom, wearing her evening robe.

Then too, my great-grandmother told me that she also on a separate occasion had seen the same dark shadowing being lurking in the house at night.
I honestly didn’t know what to make of it all. And over the years as time passed, I had grown very antagonistic against the whole thing, brushing it off as mere happenstance—a figment of my imagination or perhaps the result of my nodding off and being in that in-between place of being half awake and half asleep.
I thought about it every now and then but relegated it to the back part of my mind, paying little attention to it. I would continue to feel this way about the experience until about the year 2001. That’s when everything changed.

I was driving a long distance one night and hitting the scan button to see if I could find something to listen to on the radio to help pass the time. The station landed on 1510 WLAC on a show called Coast to Coast AM with George Noory. It was probably 2:00am or 3:00am when the show came on.

They were doing a show on what was called “shadow beings.” It was the first time that I had ever heard of something like that. As I listened to the show nothing could prepare me for what I heard next. George Noory and the guest went on to describe people’s experiences with one particular shadow being—a dark man-like figure with a large wide-brimmed hat and a cape.

Immediately I felt chills run down my spine. I knew at that moment that what had happened to me as a teenager was not a figment of my imagination and was definitely not the result of me nodding off. I had seen what these people were describing. Exactly.

I began researching as much as I could at the local library and on the Internet. There wasn’t that much information on the internet about the Hat Man or shadow people in those days, and so I decided to build the first website dedicated to the research of shadow people, and in particular the being that I had seen, known as the Hat Man.

Since 2001, I have collected and read hundreds of stories from others who have had similar experiences and have compared people’s stories to try to make sense out what has been happening. Even today I receive at least 2-3 stories per week from people all over the world who are seeing this and other such beings.

I now believe that I am at a place in life where I can draw some conclusions on who or what The Hat Man is and how he is connected to the wider experience of the shadow people. These encounters are on the rise. And I believe there is a reason. A very good reason.

This website serves as a staging ground to continue my research and to offer my help to those who have experienced this same phenomenon. If you need an ear, I can help. If you want to be rid of this and other beings, I can help.

On this website you will find all the stories of sightings of the Hat Man that have been reported to us. This website has gone through many iterations, and there have been periods where I have walked away from this project due to the strange circumstances and phenomenon that tends to happen when I engage with it.
Things have changed considerably in my life over the last 20 years and I am glad to say, the Hat Man Project is here to stay. Now that I have an understanding of what this phenomenon is and what it is all about, I no longer fear the repercussions of shining a spotlight into the darkness. I have since learned that this is part of my purpose in life, and I no longer fear these entities.

If you have any stories of any sightings that you or any of your family or friends have had, please feel free to add your story. In your submission, please include facts and details that may help in our research, i.e. what was going on in your life at the time of the sighting, etc. Also if you would, make a sketch of what the encounter looked like from your perspective.

Since we have recently rebuilt the site, there are literally hundreds of stories that I have not been able to add. I salvaged the old stories from an old backup, and will be adding the new stories weekly.

If you have a story that you would like to report, but would prefer to not post it on the web, you may send it to us by contacting us at: browntm1 @ gmail .com

Thank you for visiting The Hat Man Project website.

Have you seen the Hatman? Have you seen other shadow beings? If so what do they mean? What should be done about them? The Hatman: His Identity Revealed is the culmination of over 20 years of research into the Hatman phenomenon. After carefully reading, researching and experiencing the Hatman and other shadow beings over the last two decades, Timothy M. Brown, Jr. now offers his understanding of exactly who or what these beings are, in his new book The Hatman: His Identity Revealed.

There will be no cost for the book. If you are interested in receiving a copy as soon as it is released, click the button to the right. You will be added to our mailing list and you will be sent a copy of the book as soon as it is complete. 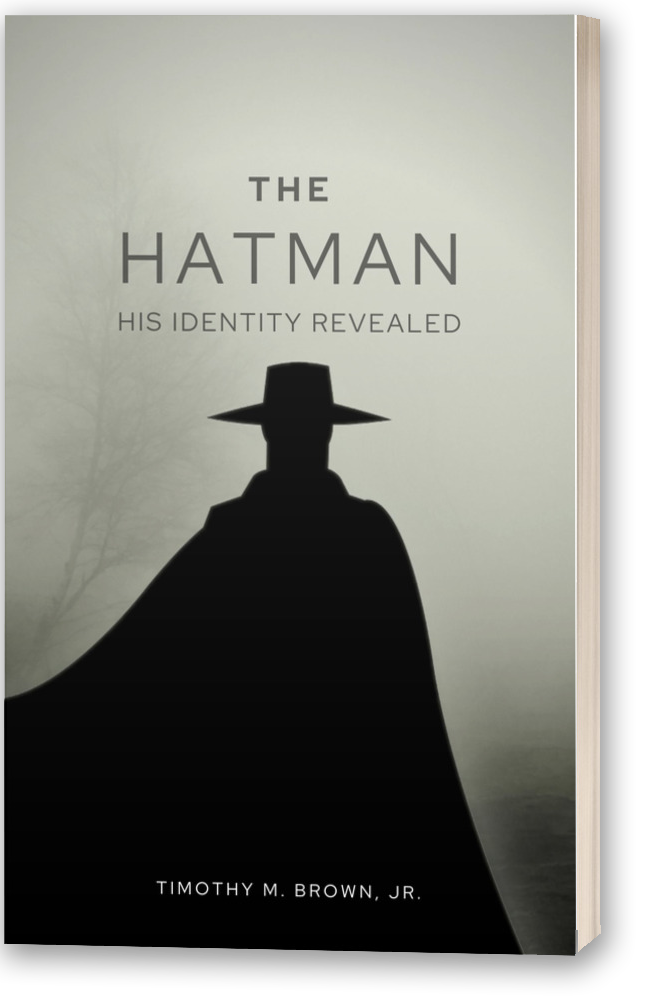